History will be made in a few hour’s time at the Village Ground in Malahide, Dublin, when Ireland’s men’s team make their Test debut against Pakistan. 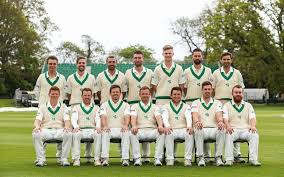 Above: The Ireland squad ahead of today’s debut Test

Here are a few stats-based snippets and insights on the big game:

– Ireland will become the eleventh men’s Test team, and the second in Europe.

– Aside from England itself, Ireland will be come the first Test nation to make its debut against a team other than England or India. Six sides have debuted against England, and three against India. England debuted against Australia.

– If Ireland beats Pakistan, it will become only the second Test country to win their first Test, after Australia beat England in 1877.

– If Ireland draws or wins, they will become only the third Test country to not lose their debut Test, after Australia in 1877 and Zimbabwe who drew their first Test with India in 1992.

– If Boyd Rankin plays for Ireland, he will become the 15th player to play Tests for two separate nations, having played one Test for England versus Australia in Sydney in January 2014.

– Rankin will become the first ever player to play in all three formats (Test, ODI and T20I) for tow international teams.

– Ireland’s Ed Joyce’s sister Isobel played in the Ireland Women’s side when they made their Test debut, also against Pakistan, in 2000.

– Malahide will become the 115th ground to host Test cricket

– Azhar Ali need 94 runs to move past Misbah-Ul-Haq’s 5,222 Test runs and into 6th place all time for Pakistan