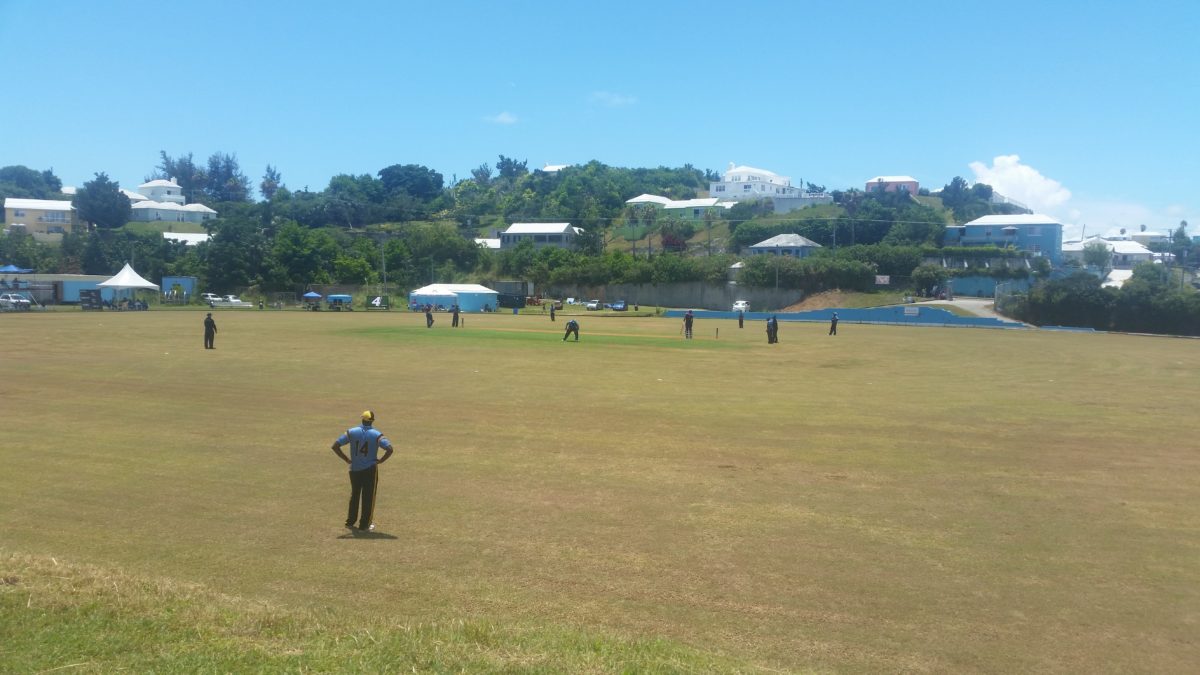 The Bermuda national men’s team played host to their counterparts from Bahamas this weekend for a five-game friendly series, with one fifty-over clash and four T20 games played over four days on the beautiful mid-Atlantic island .

For the Bermuda Cricket Board, the series was arranged as a test event, both off and on the field, to help it prepare for hosting the ICC Twenty20 World Cup Americas Regional qualifier tournament next month, where it will play alongside the USA, Canada and the Cayman Islands.

Accordingly, the first three games were held at White Hill Field in Sandys Parish in the western end of Bermuda, which is to be used as the second venue for the WT20 qualifiers, with the last two held at the National Sports Centre in Devonshire just outside the capital Hamilton.

On the pitch, coach Herbie Bascombe assembled a large squad of both senior and junior players for the series, with the aim of giving as many players as possible a taste of international cricket ahead of selecting a smaller squad for the WT20 qualifiers.

For the Bahamas, the games presented a rare opportunity to play international cricket as they look to build the sport’s profile back home and move up the ICC rankings.

The first game was held on Thursday 25th July at White Hill. Batting first, the hosts amassed 269/7 from their 50 overs, led by an imperious century from big opener Treadwell Gibbons, whose enjoyment at reaching three figures was cut short as he retired hurt immediately afterwards, hobbling off to a fine ovation from teammates, opponents and spectators alike.

He was assisted by Pierre Smith who notched a fifty in an opening partnership of 137 with Gibbons, and a 22-ball 37 from 18-year old Dalin Richardson, Bermuda’s Under 19 captain, fresh from scoring a half century for the U-19s against Argentina in Canada a couple of weeks ago. For the Bahamas, captain Gregory Taylor notched three Bermudian wickets, as did Randolph Fox.

The next day, White Hill saw attention switch to the shorter format of the game, with two T20s, although despite both Bermuda and Bahamas being accredited by the ICC, and the ICC’s decision to grant all 20-over games between member associations full T20I status, these games were not granted that full status.

However, that did little to dampen their importance to both sides. This is the format Bermuda will be focusing on most ahead of the all-important ICC qualifier next month, and it is the format that will allow Bahamas to gain official status for the first time at some stage in their future.

In the morning game, Bahamas batted first and struggled to 73 all out from 14.5 overs, with Tappin again top scoring on 25. Captain Greg Taylor indicated after the game that his side had very little experience playing on a turf wicket, and struggled with the slow pace of the track. Bermuda selected in their XI their star all-rounder Kamau Leverock, back home for a stint from his place with Nottinghamshire second XI in England. He claimed 4 wickets for 22 runs with the ball, but even this was outshone by teammate Dion Stovall who returned the astonishing figures of 4-2 off 2 overs!

Bermuda quickly knocked off their target of 74 in just 6.2 overs, but not before Greg Irving got the big wicket of Leverock for a second ball duck!

The Bahamas fared much better in the afternoon game, bringing up 136/8 off their 20 overs batting first, led by a fine 60 from Marc Taylor, younger brother of Greg. Charles Trott highlighted the bowling figures for the hosts, with 3-16. In the second innings, Bermuda overcame the target in 14.2 overs, with half centuries for Terryn Fray (56) and Oronde Bascome (52*).

Saturday 27th July was a rest fay for the visitors, with most of the Bermuda team playing in trial matches for Somerset and St Georges ahead of the domestic classic Cup Match next week, so it was not until Sunday that the teams met again in two more T20s. These games were played at the impressive North field at the National Sports Centre.

There was heavy rain ahead of the morning game which didn’t help the track, and Bahamas again struggled to 72/9 which Bermuda easily chased down scoring 73/2.

In the final T20 of the series on Sunday afternoon, Bahamas again batted first and showing some signs of fatigue from an arduous few days, limped along to 62/9 from 19 overs, hampered by an injury to key batsman Tappin who was forced to retire on 10. Dennis Brangman topped the bowling figures for the hosts with 3-12, and opening bat Gibbons chipped in with 2 wickets as well.

Bermuda chased their final target easily, with opener Allan Douglas hitting a fine 31 from 20 balls before falling c&b to Randolph Fox. Fittingly, it was left to first day centurion Gibbons to hit the winning runs sealing a 5-0 series win for the Gombey Warriors.