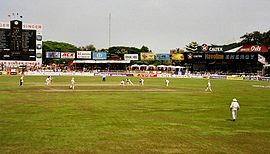 India will look to wrap up the series with a game to spare, as they are already 1-0 up after their comprehensive 304-run drubbing of their hosts in the shadow of the Galle Fort last week.

Both sides will welcome back injured players into the starting XIs with India having confirmed KL Rahul will return, likely in place of Abinhav Mukund given fellow opener Shikhar Dhawan notched a 190-run masterpiece in Galle. Sri Lanka will be boosted by the return from a bout of pneumonia of their new Test captain, Dinesh Chandimal.

Look out for the following personal milestones:

Fresh on the back of a big hundred at Galle, first-drop Pujara now has 3,966 career runs. He plays his 50th Test for India at the SSC and will be looking to celebrate by bringing up the 4,000 run milestone.

Jadeja’s six scalps in the first Test took him to 148 career test wickets, needing just two more for his 150.

Despite an injury scare at the end of the first test, it appears that the lovable Rangaga will be fit for the second game. We previewed his upcoming milestones in some details in our preview of the first test.

However, he had a relatively quiet game by his own high standards as stand-in captain in Galle, only taking the one wicket. He therefore still needs to six to overtake Mikhaya Ntini’s 390 and move into 14th place in the all-time wicket takers list.